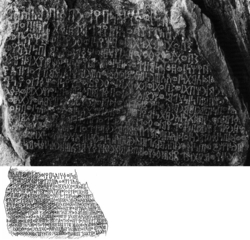 Society
The majority of the legal texts are royal decrees. But this first decree was emanated directly by the god ʾnby, the protector of property rights. According to our interpretation, the king is trying to
repeat, with the emphasis he draws from divine authority ("through the oracle" requested by the king), a decree which has not been
obeyed. It seems that, considering the system of water collection and conservation developed by the inhabitants of South Arabia, it was crucial for the entire
community that ownership of the lands earmarked for flooding be subtracted from individuals
and that they be considered the property of the king, namely of the state. Therefore the listed lands that the king is lord of had been declared set aside for the waters, thus making
it forbidden to cultivate them and build on them. In the first part, there is an attempt to specify
as clearly as possible what territories they are, giving the name and specifying the geographical
position. The decree, obviously, had not been obeyed and the king had to order the demolition of
all unauthorized buildings and cultivations that had been made. The prohibition to dig wells on the
land set aside for the flood had also to be repeated.